Use FFMPEG to resize and overlay two videos, and then live stream them

FFMPEG is a free and open source software project that offers many tools for video and audio processing. It's designed to run on a command line interface, and has many different libraries and programs to manipulate and handle video files.

How can I best overlay 2 live camera feeds with FFMPEG to produce one live stream to broadcast at api.video? I’m using a raspberry PI, and having a lot of latency issues.

We then began working on the FFMPEG command that he was using to build the livestream.

For testing purposes, I replaced the two livestreams with videos stored locally on my computer. My goal is to create a video that looks like this: Die Hard with an Indiana Jones (and the Last Crusade) overlay.

My command began with:

The -i tells ffmpeg that these are input files, and then the filename. If you were using a livestream, or a remote video you could use a url.

This says to FFMPEG, save the video output as flv and send it to my livestream endpoint. When video begins arriving at this endpoint, your api.video stream will begin broadcasting whatever video is being sent. At this point, it will just take the first input (DieHard.mp4) and stream that file - ignoring Indiana Jones. I need to do some work to add in the Indiana Jones video...

If you want to test locally, you can change the output to:

To save the video locally to your computer.

This takes in the 2 videos, outputs just DieHard.mp4 and saves it into test.mp4. We want to overlay the Indiana Jones video.

The first thing we’ll do is scale the Diehard video to 1080p (it is 1080p, but this will ensure that all future videos fit correctly), and we will give the output of this transformation the name ‘main’

Let’s resize Indiana Jones to 360p (again using the ‘-1’ to ensure that the video is not stretched), and name the resized video “overlay”. We place a semicolon between the two commands:

The [main] video is used as the main video, and the [overlay] as the overlay, and then we use the variables to place the overlay video.

And the video looks exactly how we’d like it to look! The audio, however, is from the main video: Die Hard. We can remove the audio (making the video silent) by only exporting the video from the output video. To do this, we can use the map parameter. We’ll name the overlay filter out and then just map the first track (track 0) to the output:

This results in a silent movie. We can programmatically pick which audio track (track 1 in both cases) with a second -map command:

Here are the final 2 commands (with the stream parameters added in:

In order to create his live stream, our developer simply changed the input from 2 movie trailers to his 2 live streams, and it all just worked.

And we are pretty sure John McClain never said “Yippiee Ki Yay FFMPEG!”

But that is because neither of them ever got the chance to play with the tooling that allowed us to create the video above.

In this post, we’ve talked through how to scale the dimensions of multiple input videos, how to overlay them, and then how to apply an audio track to the videos. Finally, the video created by ffmpeg is streamed to api.video for live streaming consumption by your viewers.

Live stream your Dolby.io conference call to thousands with api.video 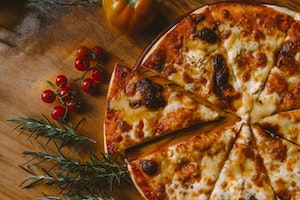 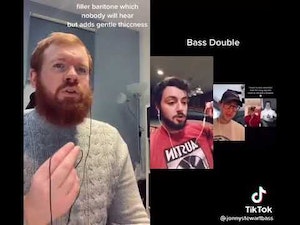